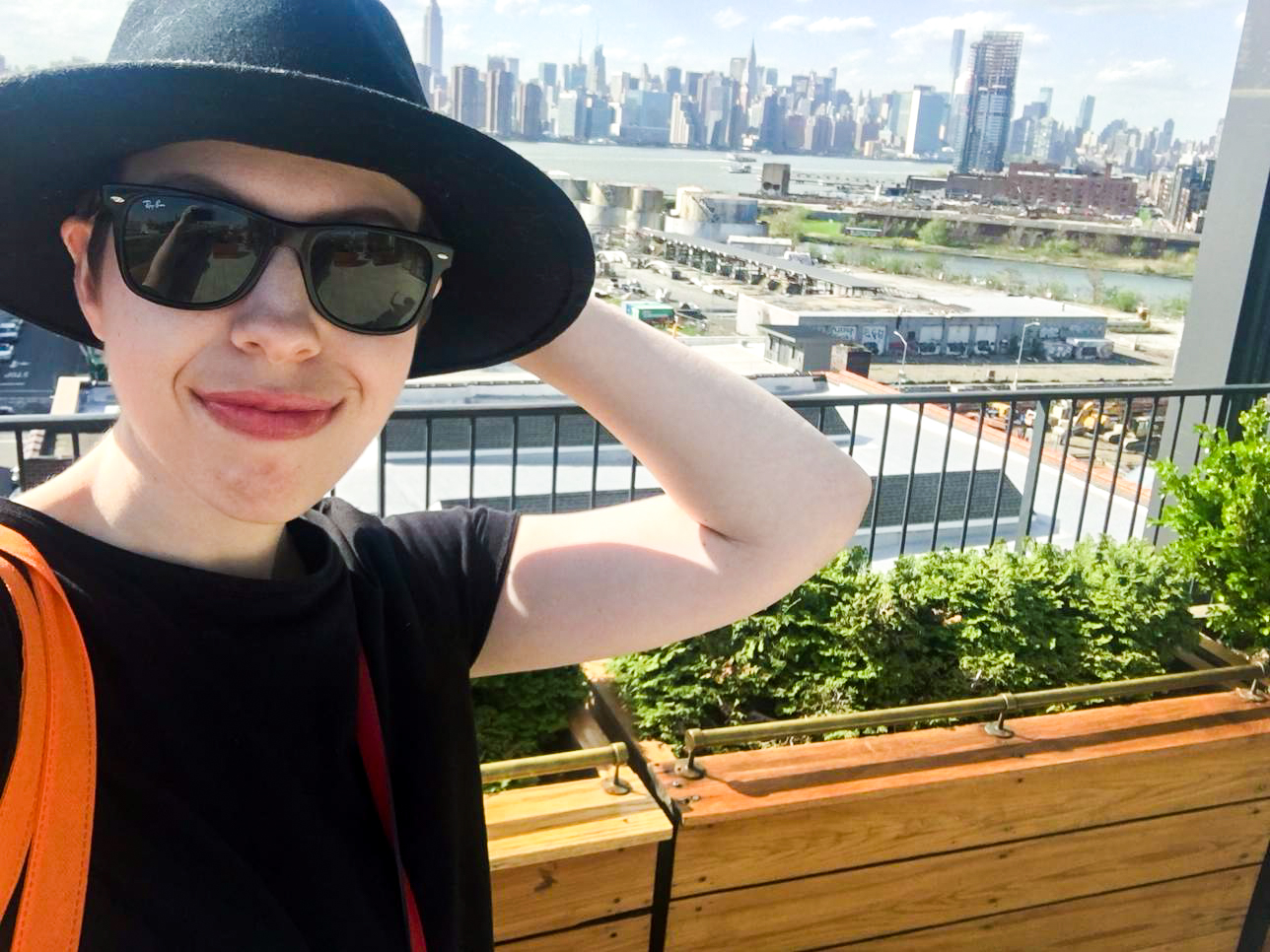 rooftop bar at the Wythe Hotel

Pretty much the entire day today was spent in Williamsburg. We woke up a little later than usual due to the fact that we had had four coffees and took a two-hour nap the day before. We got ready, grabbed our 5th Joe's Coffee of the week and took the C to the L train over into Williamsburg and walked to a place called Five Leaves for breakfast.

Breakfast was pretty mediocre. We haven't really had a super good breakfast yet, but we got food and just started wandering around. We headed southwest down Wythe Street and found a number of awesome paintings on the side of the buildings and a bunch of cool little shops.

We did walk buy this awesome looking co-working space, but I can't seem to remember the name of it. 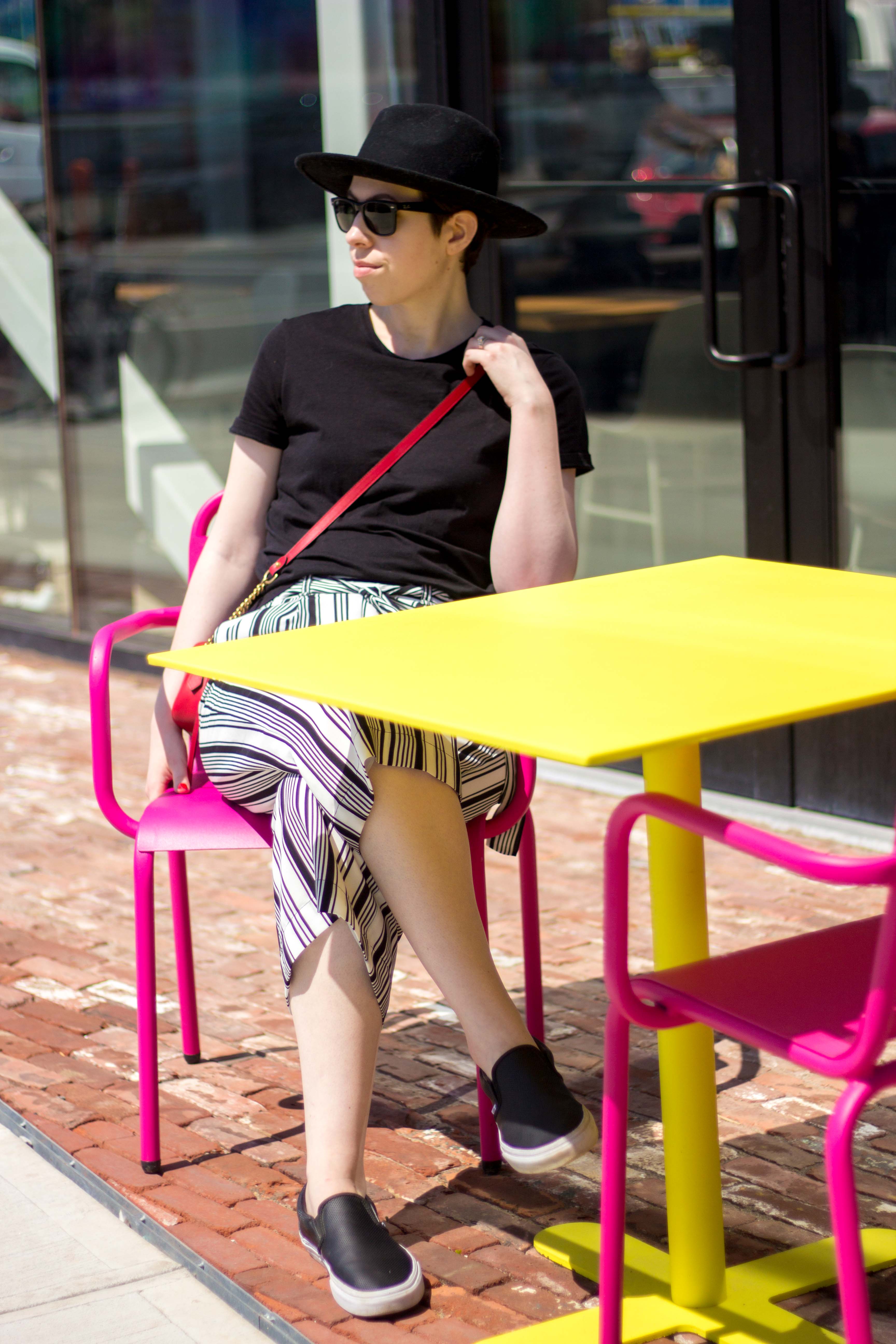 After that we just kept walking around checking out all the little shops. We walked by an Urban Outfitters and I found some really nice all-black overalls.

Urban was having a 30% off rompers sale (which overalls obviously aren't), but David asked the checkout lady if the overalls were 30% off. She said, "No," and that it was only the rompers. David jokingly said, "What if we made some quick alterations?" and she said, "Well, if you keep insisting..." and gave us the 30% off!

David insisted he was just joking and she didn't have to do that, but she said they have some policy where if people mistake an outfit style for one that is on sale they give you the sale, so she would just pretend that is what happened. So that was a total score!

It had now been over two hours since our last caffeinated beverage, so clearly, it was time for some more. We went to Freehold and got some pretty good coffee. Williamsburg has some pretty amazing coffee places, so if you're ever in New York, I highly recommend you take a day or two to explore Brooklyn a bit.

We then went to Brooklyn Tailors which is owned by one of my friend's brothers just to say, "hi." We chatted with he and his wife for a while and then they gave us some spots we should go eat and check out. It was after 1:00pm at this point so we started heading to lunch at a Mexican place called La Superior.

On the way there, we passed a nail salon that uses all natural products called PH7. I obviously had to stop in for a mani 😘.

We got to lunch around 3:00pm and it was awesome. I ordered the chicken flautas and David ordered the huaraches. The guy, whom I presumed to be the owner, was this intense-looking Mexican man with long black hair, a wide-brimmed fedora with a feather in it, full sleeve tattoos on both arms and a swanky pair of oxfords to go with his cropped trousers. He was pretty much goals on every level. After lunch, we headed to a rooftop bar which was also recommended to us. On the way, we walked by some people with ice cream...so...you know...we had to find that place.

We found one nearby, but decide to go to the rooftop bar first. We got there, and it was pretty, but we didn't really want drinks, so we just snapped a few pictures and left to go get the ice cream. 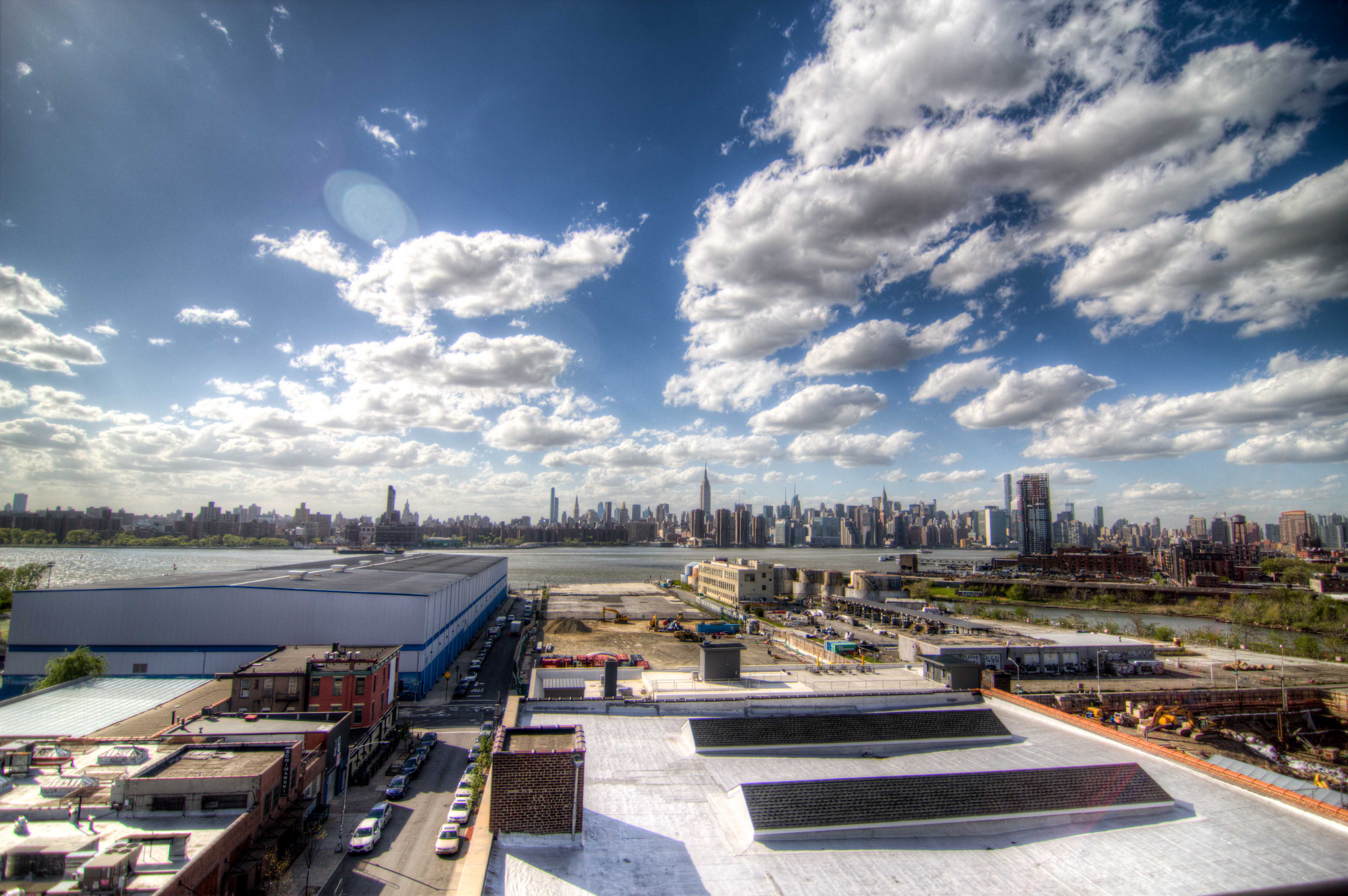 We went to Van Leeuwen ice cream, which sounds super pretentious. The ice cream though...oh my gosh...it was so incredible. By far the best we have had in NY and maybe ever. Highly recommended!

We were both pretty tired at this point so decided to head home. We thought it would be fun to take the ferry back instead of the train, so after some huge wind gusts threatened to blow our hats away, we got on the ferry.

It was a very pretty ride and fun until it dropped us off and we were over a mile from the train station. It was 6:00pm at this point, so the rates for Uber/Lyft were sky high for rush hour, so off we walked to the train station.

We got home and decided we were in for the night. That is until we were hungry again at 8:30pm 😆. We tried to go back to Levain for some cookies, but they were closed, so we went to get pizza at Pizzeria Sirenetta.

We wanted dessert though (obviously) and the place we wanted to go closed at 10:00pm, so we blitzed through our pizza (which was pretty good) and hopped back on the train to go back to Magnolia Bakery for some banana pudding again. We ended up getting a pint of pudding, a cheesecake, and a cupcake...

We ate the cheesecake and cupcake there and brought the pudding home so we could eat it while laying in bed and living our best life.

Today was another super fun day. Exploring Brooklyn is so much fun and there are a few other neighborhoods we want to check out on our next trip to NY.

We leave tomorrow night which is a bummer, but we are also pretty ready to be home. We are excited to sleep in our own bed and cuddle with Raisins.

Hope you're having a solid Wednesday and as always, thanks so much for stopping by.